Synthetic Ligaments of the Knee

Synthetic Ligaments of the Knee 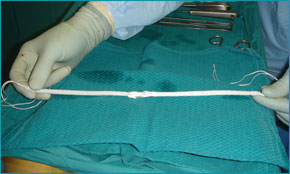 Synthetic ligaments have been around for more than 3 decades. They were developed to provide an artificial replacement for a ruptured or torn ligament and hence avoid donor site morbidity (problems arising from taking a ligament from elsewhere). There have been carbon and plastic implants, suture style implants and products made from Gortex and Dacron which are materials better suited for vascular grafts.

Over 20 years ago, a device known as the LARS: Ligament Advanced Reinforcement System was developed by a French surgeon (Dr JP Laboureau). Earlier models which failed necessitated changes to the ligament, however the current design has been available for clinical use since 1990.

Past synthetic ligaments have been too elastic (lacking stiffness). They have been made of poor quality material and have been unable to resist the normal biomechanical stresses within a joint. Some ligaments have caused severe synovitic inflammatory reactions.

The current LARS was developed with changes in the sterilisation technique and the knitting of the fibres, two areas which were presumed to be the cause of the reaction. The adjustments have been successful, as to date there have been no documented synovitic reactions.

Comments are abundant in the popular press and internet sites relating to failed grafts and stretched ligaments but it is worth noting they are often not related to the LARS, but to other synthetic ligaments. There are no reports of synovitis resulting from use of the LARS in the published literature.

Biomechanics of the LARS

The Lars is a knitted ligament, with different sizes available. There are different types for the each ligament in the knee. They are also available for the shoulder, elbow and ankle.

It is made of industrial strength polyester fibre with a specifically designed section to be placed within a joint. 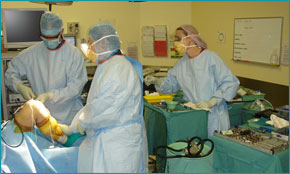 The company does not recommend the LARS for everyone and having attended the designer’s course, I believe there are clear indications for its use and patient selection. I have been very happy in its use for the past 12 months in extra-articular knee surgery which includes collateral ligament injuries, posterolateral corner and posterior cruciate ligament tears. In these scenarios the LARS acts as a scaffold- a super strong device the body can use to grow into whilst the patient can conduct accelerated rehabilitation. I have personally found patients recovering at an amazing rate following LARS surgery, months ahead of traditional reconstructions.

While synthetic ligaments have had a controversial beginning, it is clear developments and improvements in design have resulted in a very promising technology. In the right patient with the relevant injuries, synthetic ligaments can play a vital role.